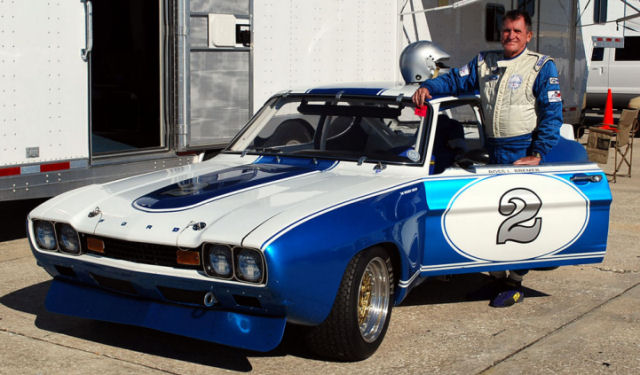 Ross started racing Go-Karts in the early 1960’s in Clearwater, FL. Over the next few years he raced in the S.C.C.A. in V.W. sedans, BMW 700 sedans, Formula Junior, Beach Formula V and finally in 1965 his Anglia Super 1300 in S.C.C.A. C/sedan. He won numerous races in SCCA regional races and in 1966 was invited to Riverside for the Run Offs as an alternate.

In 1967 he entered and drove a Lotus Cortina in under 2 liter touring in the Daytona 24-Hr finishing 3rd in class and 21st overall with Don Kearney. The same year entered the Anglia in the Sebring Trans/AM 4-Hr, but D.N.F. in the last minutes. He retired from auto racing to race sailboats and motorcycles for 15 years.

In 1991, Ross and Karen discovered Vintage racing in West Palm Beach, rebuilt the old Anglia Super, bought Karen a Ford Escort RS1600, and went Vintage racing with S.V.R.A. and other groups. Highlights have been numerous overall wins, The “Big Fun” award, Amateur Mechanic of the Year, and, in 2002, “Driver of the Year.”

Ross and Karen continue racing now with 6 racing European Fords in their stable and multiple championships in Groups 1 & 8.