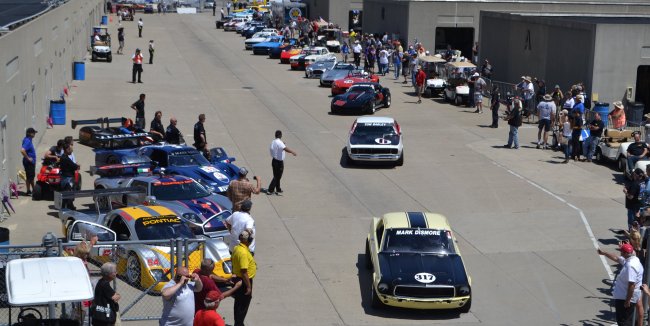 Thirty-three Indianapolis 500 veterans and NASCAR super star Bill Elliott have been paired with some of the top drivers and car owners of the Sportscar Vintage Racing Association (SVRA) for this Saturday’s fourth annual Indy Legends Charity Pro Am at the Indianapolis Motor Speedway. The Saturday, June 17 feature event will be covered live through video streaming on FloRacing.com – as will the SVRA’s entire Brickyard Invitational weekend, June 16-18.

“Last year when I heard Paul Tracy step out of Gary Moore’s ’65 Mustang and say, ’These guys are serious as a heart attack,’ I was so proud,” said Tony Parella, SVRA president and CEO. “With so many champion drivers throwing in with us like Al Unser, a four-time Indy 500 winner, I know fans recognize this event has grown into a mainstream date on the American motorsports calendar.”

Previous winners of the Indy Legends Pro-Am include Al Unser Jr. and Peter Klutt (2014), Bob Lazier and Jim Caudle (2015), Paul Tracy and Gary Moore (2016) as well as Robby Unser and Andre Ahrle, who also won in 2016. Last year as with this year, the 2016 race was organized into A Production and B Production classifications. Unser and Ahrle won A Production, while Tracy and Moore took home the B Production awards.

The Pro-Am feature is a 45-minute race on the Speedway’s 2.43-mile Grand Prix road course. The cars are racing machines from the “Group 6” SVRA class. As in previous years that will include 1963 to 1972 vintage Corvettes, Camaros, Cobras, and Mustangs but also this year Davy Jones and Larry Ligas will share a 1961 Jaguar XKE. As in the previous three years, the professionals and amateur drivers will split stints at the wheel at their discretion.

In addition to the Pro-Am, there will be a festival of other activities including the Motostalgia car auction, the Hagerty Insurance “shine and show” car corral, a motorcycle homage with vintage motorcycle racing and displays, and hundreds of vintage racers ranging over 100 years of automotive history racing in SVRA Groups 1 through 12. Harley-Davidson will formally unveil as the “Official Motorcycle of the SVRA.” In addition, an oval exhibition featuring a racecar show of judged competition for the A.J. Watson and Sir Jack Brabham trophies led by track historian Donald Davidson will take place. Also, for the first time ever, the 51-year-old professional Trans Am series will compete as the Sunday afternoon feature race. Heading the pack will be series champion Amy Ruman who has won the crown the last two years.