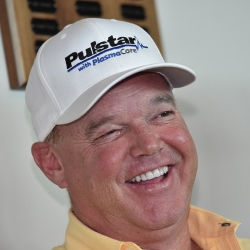 Sportscar Vintage Racing Association (SVRA) today announced that Al Unser Jr. will be their first grand marshal for the 2018 season when America’s premier vintage racing organization presents their March 1-4 Sebring Vintage Classic at the iconic airport course. In addition to ceremonial duties, Unser will speak to the SVRA membership at a Saturday night banquet.

Unser competed in three Sebring 12-Hour races, finishing on the podium twice. In 1985 the versatile driver was second overall and followed that up with a third-place finish in 1986.

“Al has been a great friend to SVRA since I joined the organization,” said President and CEO Tony Parella. “While he’s best known for his great success in the Indianapolis 500, his resume in sports car racing is very stout, including two overall wins in the 24 Hours of Daytona.”

“I have many fond memories of racing sports cars and it is always great to return to Sebring,” Unser said. “Sebring is one of those rare classic road courses where you can just feel the special history I respect so much. SVRA race events are always great fun. Every time I attend it is an opportunity to catch up with good friends, both new and from my driving days.”

Al Unser Jr. is a two-time Indy car champion (1990 and 1994) and the winner of 34 Indy car races including the 1992 and ’94 Indianapolis 500s. His 1992 Indianapolis 500 victory is the closest finish in history with a margin of just 43 ten-thousandths of a second over second-place Scott Goodyear. A versatile driver, he was a winner in World of Outlaws sprint car racing, 1982 Can-Am champion, and IROC champion in 1986 and again in 1988. He’s also a two-time winner of the 24 Hours of Daytona in 1986 and ’87. Like his father Al Unser Sr. and Uncle Bobby Unser he enjoyed tremendous success as a star driver for Roger Penske’s team, which provided his winning entry for the 1994 “500.” Unser is no stranger to SVRA racing, having won the 2014 Brickyard Invitational Indy Legends Charity Pro-Am and returning to the podium there last year.

Unser will join the SVRA’s hundreds of vintage racers from across the country at Sebring, where, in 1976 a vintage race was held that laid the groundwork for the formation of the SVRA. Today’s professional Trans Am series will share the iconic Sebring venue with SVRA during the weekend. The Hagerty Insurance “Show & Shine” car show will also be part of the speed festival. Owners can register for the Hagerty event on the SVRA Web site.