Agreement Activated By WEX, Pioneer In Fuel Card Solutions Since 1983 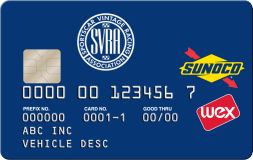 The Sportscar Vintage Racing Association (SVRA) announced today that it is co-branding a fuel credit card with Sunoco and WEX. The agreement builds on the momentum gained from the October 2017 announcement that Sunoco is now the “Official Race Fuel of SVRA.”

“SVRA has come so far in the past five years to earn the faith of great brands like Sunoco,” said Tony Parella, SVRA president and CEO. “We are excited to unlock the value of this Sunoco fuel card program with SVRA – not just for our members but also the larger SVRA community, including the prep shops supporting our racers and fans as well. Anyone within SVRA can take advantage of this card.”

The new Sunoco-SVRA fuel card program offers business owners a choice of two cards: The SunTrak® card which can be used at more than 5,000 Sunoco-branded fueling stations and the Sunoco Universal card which can be used both at Sunoco-branded fueling stations as well as at more than 90 percent of all retail fuel locations across the United States. The Sunoco Universal card may also be used at more than 45,000 general retail merchants.

Both fuel cards provide savings of up to six cents a gallon each time users fill their fuel tanks at Sunoco-branded locations and at participating U.S. race tracks. For business applications such as fleet management and transport, the card provides one simple solution for streamlined reporting, tracking and cost management. Secure, easy-to-use online tools put accurate and timely information at the fingertips of business managers.

“At Sunoco, we have a history of quality and performance and we know that’s a big reason why SVRA named us their official fuel late last year,” said Rob Marro, vice president of performance products at Sunoco. “We take great pride in this partnership – as SVRA is well-established as a premier racing association with a growing following and membership. We’re pleased to expand our partnerships with both SVRA and with WEX to offer a valuable card program to such an enthusiastic and supportive audience.”

The announcement extends a string of SVRA sponsorship agreements over the past year. Other top-brand partners to extend their contracts or join the list of investors include Jaguar, Land Rover, Merrill Lynch, NetJets, and Mazda.

SVRA’s success in attracting sponsorship investors is a cornerstone to the company’s impressive momentum. Company officials report consistent annual triple-digit growth since 2012. SVRA has rapidly expanded from a regional series largely concentrated in the southeastern United States to one that spans the continent at most of America’s top race courses. These include the Indianapolis Motor Speedway, COTA, Watkins Glen, Sebring, and Road America.

About WEX – Powered by the belief that complex payment systems can be made simple, WEX Inc. (NYSE:WEX) is a leading provider of payment processing and business solutions across a wide spectrum of sectors, including fleet, travel, and healthcare. WEX operates in more than 10 countries and in more than 20 currencies through more than 3,300 associates around the world. WEX fleet cards offer 11.5 million vehicles exceptional payment security and control; purchase volume in its travel and corporate solutions grew to $30.3 billion in 2017; and the WEX Health financial technology platform helps 300,000 employers and more than 25 million consumers better manage healthcare expenses. For more information, visit www.wexinc.com.