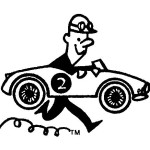 The group was founded in 1957 and provides car enthusiasts (“Chowder Heads”) from throughout the metropolitan area the opportunity to get together and talk about cars on the second Tuesday of every month. Among the luminaries who have previously spoken to the group are, Edsel Ford, Roger Penske, Bobby Rahal, Brian Redman, Phil Hill, and Steve Saleen, to name but a few.

SVRA members are invited to attend and reservations can be made by calling Mike Lindgren at 516.972.4304 prior to April 4th.