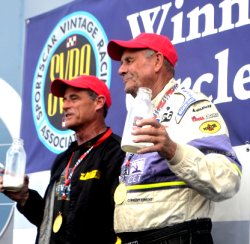 The Sportscar Vintage Racing Association (SVRA) today announced a new twist for the “Indy Legends” Charity Pro Am feature of its Father’s Day weekend Brickyard Invitational at the Indianapolis Motor Speedway. New for the third running of the contest will be the decision to organize the race’s entries into two classes, AP (A Production) and BP (B Production). The cars are 1963 to 1972 vintage Corvettes, Camaros and Mustangs of the SVRA’s “Group 6” machines. The decision means there will be two podiums at the end of the race, one each for AP and BP.

“We are working to present fairer competition that will be more enjoyable for the drivers and fans alike,” said SVRA President and CEO Tony Parella. “The two classes are primarily based on big and small block engine sizes, but we are also applying an equivalency formula philosophy based on data we have about the cars to make sure the machines in each class are as evenly matched as possible to produce good and spirited racing.”

The SVRA recently announced that the field for the Pro-Am race is full with 33 Indianapolis 500 veterans plus a “Garage 34” promoter’s option adding NASCAR stars Bill Elliott and Ray Evernham. The 34 two-driver teams will compete in a 40-minute competition of American muscle cars on the Speedway’s 2.43-mile Grand Prix road course on Saturday, June 18. All drivers will be in 1963 to 1972 vintage Corvettes, Camaros and Mustangs of the “Group 6” SVRA class. The pairings of professionals and amateurs is listed below along with the make, vintage and class of car. Last year’s winners, Bob Lazier and Jim Caudle will be reunited as a BP entry this year. Professionals in the Pro-Am will be paired with amateur drivers, splitting stints at the wheel at their discretion.

This year’s Pro-Am has attracted new and exciting names such as 2003 Indy car champion Paul Tracy as well Larry Foyt and A.J. Foyt IV and 1992 Indianapolis 500 pole winner Roberto Guerrero. Heading the list of those who have competed in the event in its prior editions is two-time Indianapolis 500 champion Al Unser Jr. who also won the first “Indy Legends” Pro-Am in 2014. His cousins Robby and Johnny Unser also plan to drive as well as marquee names such as Willy T. Ribbs, Geoff Brabham, Davy Jones, Davey Hamilton and Lyn St. James.

Drafting on the huge success of the recent 100th running of the Indianapolis 500, the Brickyard Invitational will offer fans a festival of racing activities. As in previous years the SVRA will present exhibition runs on the storied 2.5-mile oval by a wide variety of cars including several of the crowd-favorite 1950’s Indianapolis 500 “roadsters.” The 2016 weekend not only promises a huge gathering of hundreds of racecars but also some of the finest collector cars. Motostalgia, with offices in Austin, Texas, Mexico City and Monaco will stage an auction of select automobiles from around the world. Evernham will auction four of his special racecars, including an ex-Marty Robbins NASCAR Plymouth Modified for charity. Al Unser Sr. will auction a custom motorcycle made of old Indy and sprint car parts, also for charity.

The Brickyard Invitational will also expand out into the world-famous infield with car corrals for organizations and clubs united by special marques and vintages as well as its Hagerty’s “Shine and Show” car show. Saturday evening entertainment will include a concert by the legendary rock band, “Three Dog Night,” capped off by a trademark SVRA mega-fireworks show.