“Our association with the SVRA is a great brand fit as we expand our offerings from our base of rare and fine collector cars into the niche of collector racecars as well,” said Motostalgia Founder and Chairman Antonio Brunet. “I don’t think there is any place on Earth to better call attention to our expansion into the auction of special race cars than the iconic Indianapolis Motor Speedway and to do it with Al Unser and Ray Evernham working for charity is simply over-the-top.”

Unser’s offering is a departure from standard Motostalgia fare as it is not a car but a one-of-a-kind Pro Street Motorcycle constructed for him in 2009 by Racing Innovations of Oklahoma City. The masterpiece of custom work is constructed of parts from Indy and Sprint cars once driven by Unser. An exceptional feature is the incorporation of 18”x8” magnesium wheels from a 1963 Novi. Real knockoff spindles and injector stacks are from a Sprint Car and the exhaust system has Indy car components. The two-wheeler was built for Unser as a tribute to his 1971 Indianapolis 500 victory in the Johnny Lightning Special. 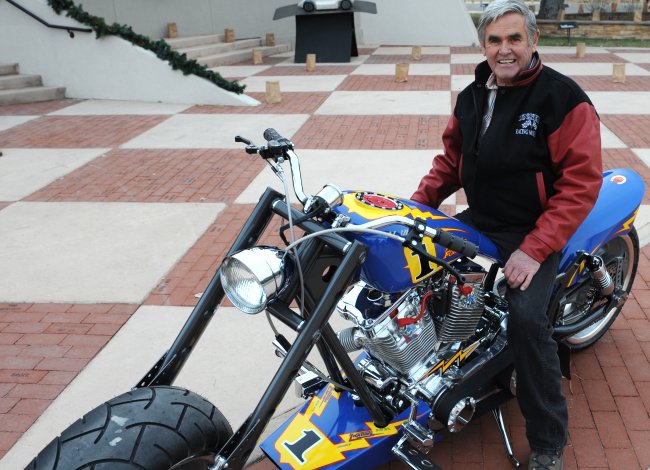 Evernham is auctioning four racecars but the one he is selling for charity is his ex-Marty Robbins 1964 Plymouth NASCAR Modified Sportsman. Robbins, a country music superstar in the 1960’s and 70’s, raced part time in NASCAR Winston Cup. He scored five top-ten finishes and had two appearances in the Daytona 500 in a driving career that spanned 1966 to 1982. Robbins raced the car at the Nashville Fairgrounds Speedway. It retains his original seat, pedals and steering wheel as well as the frame, roll cage and suspension parts. The machine was featured in an episode of Evernham’s Velocity Channel television series, “Americarna.” Ray Evernham Enterprises restored the racer.

The sale of Unser’s motorcycle will benefit the Unser Discovery Campus, Inc., an IRS 501(c) (3) educational non-profit. The organization has served as home to a nationally top 100-ranked charter school, a school for autistic children, the Challenger Learning Center of New Mexico, a driver’s education program as well as the Unser Racing Museum. Al Unser serves as president of the board of directors.

The sale of Evernham’s Plymouth NASCAR Modified will support the Evernham Family’s Racing for a Reason Foundation with proceeds going to The Autism Society of North Carolina’s “IGNITE” program. IGNITE is a community center for young adults with high-functioning autism or Asperger’s Syndrome.

This year’s Brickyard Invitational Motostalgia auction will be limited to 85 rare collector cars and historic racing machines. Among the racecars are two that competed in the Indianapolis 500 for owner Kent Baker, who is also donating some of the proceeds to charity. The cars are a 1987 Lola driven by Mario Andretti twice during that season and a 1986 March in the livery of Unser’s 1987 Indianapolis 500 winner.

Baker will donate to the Steven Drybread Memorial Scholarship for the Arts which recognizes an outstanding North Central high school graduating senior who exhibits a passion for performing/visual arts, and who demonstrates financial need. Drybread was a North Central graduate who played Electric Bass and Saxophone in the 60’s band, “The Boys Next Door.” Steve died in an airplane accident in May 2002.

Among the outstanding collector cars that will be available are a 1953 Porsche Pre-A Coupe prototype, a 1924 Isotta Fraschini Tipo 8 and a 2000 Ferrari six-speed with only 3,000 miles on it. The auction will take place June 18 between 5 pm and 9 pm in the IMS Pagoda Plaza. There will be a preview reception on Friday June 17 between 5 pm and 8 pm while the collection can be previewed open house fashion Thursday through Saturday, June 16-18, between 9 am and 9 pm. Motostalgia’s 2015 event exceeded expectations, garnering $4.2 million in sales, and company officials expect an even larger sales volume this year.

Beyond the Motostalgia auction, the Brickyard Invitational offers a festival of racing activities. The feature event of the weekend is the “Indy Legends” Charity Pro-Am. A field of 33 Indianapolis 500 veterans, headed by two-time Indianapolis 500 winner Al Unser Jr., will compete in a 40-minute competition of American muscle cars on the Speedway’s 2.43-mile Grand Prix road course on Saturday, June 18. In a new twist, a “Garage 34” promoter’s option brings NASCAR stars Bill Elliott and Evernham into the field to share a car. All drivers will be in 1963 to 1972 vintage Corvettes, Camaros and Mustangs of the “Group 6” SVRA class. Professionals in the Pro-Am are paired with amateurs, splitting stints at the wheel at their discretion.

The SVRA will present exhibition runs on the storied 2.5-mile oval by a variety of cars including several 1950’s Indianapolis 500 “roadsters.” The Brickyard Invitational will also expand onto the world-famous infield IMS golf course with car corrals for organizations and clubs united by special marques and vintages as well as its “Shine and Show” car show. Series sponsor Jaguar will have Indianapolis 500 veterans Davy Jones and Roberto Guerrero on hand to coach anyone with a valid driver’s license in mastering an autocross course with their latest model performance cars. Saturday evening entertainment includes a concert by “Three Dog Night” capped off by a trademark SVRA mega-fireworks show.

The SVRA has 11 groups of racecars spanning 100 years of vintage machines. The array of entries at IMS will include select pre-war machines, classic sports cars, Formula One and Le Mans prototypes as current as 2011. All will compete in three days of racing on the Speedway’s Grand Prix road course. Race fans can enjoy every minute of the action with overnight camping inside IMS. Pro-Am cars and drivers will also participate in a Fan Walk through the starting grid prior to the opening ceremonies allowing spectators to see the cars up close, take photos and chat with the drivers. All Pro-Am entry fees will be donated to the Indianapolis Motor Speedway Museum Foundation and the Hagerty Education Program.