Legendary Driver Returns To The Scene Of His First Trans Am Victory, July 27-30 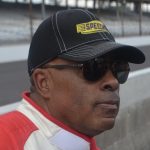 The Sportscar Vintage Racing Association (SVRA) today announced that Willy T. Ribbs, who made history as the first black driver to qualify for the Indianapolis 500, will serve as grand marshal for their July 27-30 Vintage Racing Festival at Portland International Raceway (PIR). The 12-turn, 1.967-mile road course was the setting for Ribbs’ first victory in 1983 during the halcyon days of the Trans Am series. The PIR triumph kicked off a streak of 19 career wins, making Ribbs the most prolific Trans-Am winner of the mid-1980’s.

“Willy is a true friend to the SVRA and shares our vision of vintage racing as a mainstream category of motorsports,” said SVRA CEO Tony Parella. “His active participation as a driver in our Brickyard Invitational Indy Legends Pro-Am since 2014 and appearances at other events on our nationwide schedule is a genuine asset to the growth we have experienced.”

Ribbs looked like a cinch to win the most recent Indy Legends Pro-Am held June 17. He held a seemingly insurmountable lead in the closing minutes of the 50-minute contest until his black Duntov 1969 Corvette suffered engine failure, opening the door for Sarah Fisher and co-driver Kirk Blaha to take home the honors.

“Coming back to Portland is the perfect elixir for the disappointment at Indy,” said Ribbs. “Portland is a very special place for me because PIR was where I earned my first win as a professional driver.”

Ribbs is a two-time qualifier for the Indianapolis 500, in 1991 and again in 1993. He was also tested for a Formula One seat, in 1986, with Bernie Ecclestone’s Brabham team. He was Trans Am’s most prolific winner from 1983 through 1985, when he scored 18 of his 19 career-total victories. He was series rookie-of-the-year in 1983, winning five times and more than any other driver. After Trans Am, he moved to Dan Gurney’s IMSA Toyota team for two years and picked off another 10 victories.

In addition to races for all of SVRA’s vintage race groups, today’s Trans Am will be in action at the PIR event with the third of four West Coast Championship races. Also on hand will be the exciting new Mazda Miata Heritage Cup Series. That race is for first generation 1.6-liter spec Miatas of 1990 to 1993 vintage. This Miata competition enjoys corporate support by Mazda Motorsports to offer grassroots racers a new, exciting, and affordable entry point to the fast-growing sport of vintage racing.