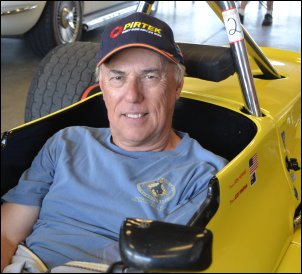 Legendary Driver Returns With SVRA To Scene Of IMSA Success

The Sportscar Vintage Racing Association (SVRA) today announced that legendary Le Mans 24 champion and IndyCar veteran Geoff Brabham will serve as grand marshal for their July 26-29 Vintage Racing Festival at Portland International Raceway (PIR). The 12-turn, 1.967-mile road course was the setting for Brabham’s 1988 IMSA race win, his sixth of seven consecutive victories that year that netted him America’s most coveted sports car championship. PIR also holds a special memory for Brabham, when he made his only start for Penske Racing in the 1989 IndyCar race.

“Geoff and his family are an important part of SVRA,” said SVRA CEO Tony Parella. “His active participation as a driver in our Brickyard Invitational Indy Legends Pro-Am and even race victories at other events on our nationwide schedule is a genuine asset to the growth we have experienced.”

Brabham and his son Matt dominated Indy Legends Pro-Am qualifying at the Indianapolis Motor Speedway June 15. Matt took the pole and Geoff earned the other spot on the front row of the grid. Geoff’s car was an early out with mechanical failure, but Matt put on a dramatic come-from-behind effort to take home the win. Geoff also won the open-wheel Group 2 race that weekend in a 1971 Brabham BT-35 racer.

Brabham was a master of sports car racing and the star driver of the dominant Nissan team that won four successive IMSA GTP championships from 1988 through 1991. During this time he scored an amazing 23 overall victories. He also won the 1993 24 Hours of Le Mans, the 1989 and 1991 12 Hours of Sebring and the 1981 Can-Am series championship. Brabham is a 10-time starter in the Indianapolis 500, with a best finish of fourth in 1983. He was active in the Indy car series during the 1980’s recording eight podium finishes and 31 top tens. Geoff’s outstanding career earned him six invitations to compete in the elite IROC series where he won two races. He began racing Formula Fords in Australia in 1973 and won the 1975 Australian Formula 2 championship and the 1979 Formula Super Vee championship before reaching the top levels of the sport. Geoff was inducted into the International Motorsports Hall of Fame in 2004, and the Australian Hall of Fame this year.

In addition to races for all of SVRA’s vintage race groups, today’s Trans Am will be in action at the PIR event with the fourth of five West Coast Championship races. Also, The Masters Historic Formula One cars will compete in feature races on both Saturday and Sunday.